As America's craft beer industry continues to boom, the waste it generates can pose challenges for sewer systems. But if it's used in the right spot, in the right amount, it's potentially beneficial and can actually save wastewater treatment plants money.

In Bozeman, Mont., the Water Reclamation Facility treats more than 6 million gallons of water every day from sinks, showers, toilets — really anything that goes down a drain. That includes liquid waste from more than 10 breweries in this city of nearly 50,000.

Because it's rich in yeast, hops and sugar, brewery waste can throw off the microbes that wastewater treatment plants rely on to remove nitrogen and phosphorus. The two nutrients can cause algae blooms in rivers and kill off fish.

"But if we can use [brewery waste] correctly and put it in the right spot, it's very beneficial to the process," engineering consultant Coralynn Revis says.

Revis led a pilot project here last summer to try to do just that. Bozeman worked with a local brewery to feed its beer waste to the treatment plant's bacteria at just the right time in just the right dosage.

"This is super-simplified, but like, if they're eating their french fries, they need a little ketchup with it. So to get the nitrate out, you dose a little carbon, and the bugs are happier," Revis explained.

She says it worked.

Revis and her team got the idea from a small town about 300 miles to the north near the border with Canada.

On a recent Friday night, the taproom at Triple Dog Brewing in Havre, Mont., population 10,000, is packed.

"With my knowledge of brewing and fermentation, I said, 'Why aren't we doing this? This sounds amazing,'" Garrity says.

If it worked, the little town could potentially avoid having to spend $1 million upgrading its wastewater plant to meet new, more stringent clean water standards.

Across town, Drue Newfield, Havre's wastewater plant manager, walks over to something that looks like a well.

"This is where we apply it," Newfield says.

For the last three years, Newfield or one of his employees has been dumping one bucket of spent barley from Triple Dog Brewing into the water rushing below every morning.

"The bacteria love it is what I've found, and it just disappears by the end," Newfield says.

The team did a lot of troubleshooting the first two years, but Newfield says they eventually figured out how much spent barley to add and what conditions the bacteria needed to be happy.

Without the free spent barley, the wastewater treatment facility would have had to buy a chemical called alum to do the same thing.

"We know the alum that we saved already is about $16,000 a year for sure. But if that wouldn't have done it, that's when an upgrade around the corner would have been, and then if we have to do an upgrade, there's where you run into the millions," Newfield says.

The Environmental Protection Agency noticed Havre's innovative approach and gave it an honorable mention at the end of last year.

"I didn't go into this for an award. I went into it just because — what do you do to do the best job you can?" Newfield says.

Newfield and Garrity, of Triple Dog, say they think their partnership is a model that could be replicated elsewhere. Several towns in Montana are interested in trying it, and Newfield says he even got a call from a plant manager in Boston.

But it may not work everywhere. While the Water Reclamation Facility in Bozeman found that the chemistry worked, the logistics of transporting the liquid brewery waste there are too expensive for now. If regulations get stricter, the plant may consider this approach in the future. 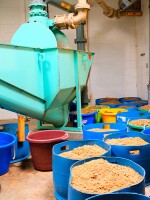 Rachel Cramer
Rachel is a UM grad working in the MTPR news department.