This article was originally featured on WXPN's The Key on May 20.

In recent years, the beat-making community has grown into a global movement. Once a small, insular guild of folks with specialized skills, the knowledge required to make beats has been democratized via YouTube tutorials, info-sharing message boards, and more. Coupled with the fact that access to the technology required to produce tracks has opened up, allowing people from all walks of life to produce music for musical communities around the world, and beat-making is flourishing in 2021.

Predictably, this dynamic exists here in Philly as well. Our city boasts a great variety of producers who can not only make tracks for artists, they showcase their skills by creating and releasing their own independent instrumental projects. Here are five of the best recent beat tapes by producers with deep ties to our city's music scene.

For years, Philly-based producer and multi-instrumentalist Rolled Gold has been carving out a distinct sound built around crisp kicks and snares, as well as soulful chord progressions. For the fourth volume of his Archetype Beats series, Rolled Gold lays down nine breezy instrumental tracks that are a perfect complement to a nice smoke or meditation session.

Working under the name GentleJawns, Joie Kathos and Jacqueline Constance create beats that are colorful and understated. With tracks like the dreamy Neo-Soul bop "After 2am" and "I Don't Know" with its atmospheric synths, GentleJawns Vol 2 establishes a sound that is bittersweet, rich and nocturnal.

FREE WRLD is an impressive debut beat tape from up-and-coming producer AP. Whether it's the soulful keys and bouncy drum break on "Eastcoast Sweatshirt" or the slick, Fela-esque groove of "Afro," the entire tape is full of inventive tracks, and it's exciting to imagine what AP will do next behind the boards.

For the past 10 years, Small Professor's Jawns series has acted as an outlet for the Philly-born producer to flex his adept sample flipping skills. A Jawn Supreme (Vol. 1-3) is a peak in Small Pro's long and varied career with each tape showcasing his evocative and quirky approach to manipulating and arranging samples.

Jersey-born and Philly-raised producer/filmmaker Deion's Life Is Beats Part II acts as the score to Life Is Strange, a film that Deion created and released independently this year. With the film's story focusing on two brothers on the run from law enforcement, this soulful soundtrack sets a dramatic tone that is rich with emotion. 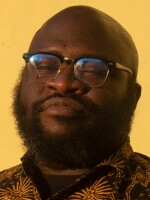 John Morrison
John Morrison is a writer, DJ, and sample-flipper from Philadelphia. As a writer, his work has appeared in NPR Music, Bandcamp Daily, Jazz Tokyo, Grammy.com, and more. He is also the host of Culture Cypher Radio, a hip-hop radio show on NPR member station WXPN.