Sandra Cisneros On Girlhood, Expectations And Finding Her Voice In “The House On Mango Street”

Sandra Cisneros is an award-winning author. She attended graduate school for poetry at the Iowa Writer’s Workshop, finishing her M.F.A. in 1978. In her free time during the workshop, she started writing what would become “The House on Mango Street." After six years of writing and revising, it was published in 1984. It has since sold more than 6 million copies and is read in many middle schools, high schools and universities. She has also written several poetry collections, novels and children’s books. Cisneros currently lives in San Miguel de Allende, Mexico, with her dogs and among palm trees.

On the origin of the book
[At the University of Iowa,] I felt lost in the poetry workshop. The things I wrote about were in a voice that wasn’t mine. When I began [The] House [on Mango Street], I had to search for what I knew that no one else in my class knew. It forced me to go into my past, an earlier voice, earlier shame, an earlier neighborhood, and that is how 'House' began.

On thinking about her audience
It wasn’t until I was teaching in the Mexican American community that I started thinking about who would read this. I was teaching high school students and I started adopting them as characters in the landscape of my childhood. By then I knew I wanted to write something that they could read, that bus drivers could read, that housewives, like my mom who had seven kids, could read. By then I was more conscious of the reader.

On the impact of her book
When we write something, it takes many years, sometimes decades, before we hear from the readers. It is like we put a note in a bottle and toss it out into the sea. Those stories I wrote in my twenties, I did not really start understanding what I had done until about the time I was 40. I planted some seeds and I did not see the harvest until I was 40.

On finding her voice
I was in Iowa and I did not have my voice. I lost my voice in the workshop, so this was a way for me to comment on the world with an earlier self, an earlier place with autobiographical shame about my neighborhood, my poverty, the people I knew. In writing it, I discovered the richness of that neighborhood, and as I gathered the stories from my students, I started realizing this is what I want to be, this is what I do not want, through Esperanza’s voice. I started discovering my politics, my feminism, my roots as a working-class woman, as the daughter of an immigrant, all these things came to the fore. They did not come from my head. They came from my heart.

On seeing things others do not
When you are a girl, you are invisible, especially if you are a Mexican girl. You are in the room and people are talking around you. I felt as if I was a spy in the house of my family and in the university. I did not speak because I had such low self-esteem about what I had to say. I was often silent. I was a witness. Listening is very good training for being a writer. 'The House on Mango Street' allowed me to find my voice. It helped me find my writing voice, my direction and what I wanted. Women in their twenties always inherit what we want. We are not asked what we want in life, we are told by Church and State. The book allowed me the freedom to invent the protagonist's life, but also my own. I did not want to be a mom. I wanted to be a writer. I wanted to mother books.

On expectations
In my own life, I had to struggle to go to school at the University of Iowa, because it was the first time I was moving away from home. It was a real struggle with my father. I could study. He expected that, but he wanted me to go to college to find a husband, so he was really disappointed when I left college and then graduate school with no husband. I was looking for my freedom. I wanted to get out from under my father’s roof. I wanted to find my own direction and travel and do things that writers do. I did not know how to become a writer, but I was trying awfully hard. I did not know any writers except for the ones I would meet at the University of Iowa. A lot of them were not great models of what I wanted to become. I think my friendship with my classmate, Joy Harjo, who is now the Poet Laureate, was probably the most significant encounter I had at Iowa. She was a little older than me. She already had two children and she had a pickup truck. I looked up to her. She helped me to find my path as a woman of color, as a woman from a working-class neighborhood.

On literary ancestors
So many writers have inspired me. I think the mother of my book would be Chicago poet, Gwendolyn Brooks’, 'Maud Martha,' even though I wasn’t aware of her book until after I wrote mine. She is still a literary ancestor because I was influenced by her poetry before I discovered her prose. Later I would discover Elena Poniatowska, the grande dame of Mexican letters, and her story cycle, 'Lilus Kikus.' These books came to me after 'House,' but they are still related to 'House'. 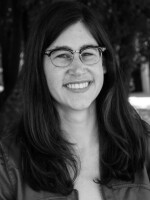