What Voters In Ohio Are Saying About The Government Shutdown

Voters across the country are looking for clues for when the shutdown will end. Often, they are choosing sides based on their partisan leanings - their like or dislike of Trump. And there's frustration at the inability to get anything resembling real negotiations underway. NPR's Don Gonyea has been talking to voters in Ohio.

DON GONYEA, BYLINE: I'm in Chillicothe, Ohio, about an hour south of Columbus. This was, in fact, once the state's capital. It's a pretty red part of the state. But in the city itself, you find a precinct that went for Trump next to one that went for Hillary Clinton next to another where Trump won and back and forth. Just on the edge of downtown, I wandered into a barbershop where Kevin Newsome is the owner and the guy with the scissors.

GONYEA: We're talking about the government shutdown, and it's clear that he's backing President Trump in this fight over the border wall.

NEWSOME: They just can't be fighting each other because they're mad because one man's president and their man's not.

GONYEA: Newsome stresses that he's not against immigration but that people have to come in legally. Otherwise, he says, they are not welcome in the U.S. He says building the wall will help that. And he says the president is right to make that the issue in any negotiations about reopening the government.

NEWSOME: Absolutely I'm with Trump. I'm going to be with Trump. Sorry. That's how it is. I like him.

GONYEA: Outside the barbershop on this cold morning is 63-year-old Miljenko Marinkovich. As he shivers in the frigid weather, he explains that he lives in Florida but that he's in town visiting his brother who's at the VA hospital here. In fact, his brother's inside getting his haircut as we speak. Marinkovich immigrated to the U.S. as a small child. On the demand for funding for the wall, he says the president is being, quote, "obstinate."

So you did not vote for him.

MILJENKO MARINKOVICH: Oh, no, I did not vote for him. And yeah - but he is the president, and I respect that. But I wish he would simply change his mind on this.

MARINKOVICH: The deal is not working. The deals he used to make, well, they work in the real estate business, not in government.

GONYEA: Now to a sprawling shopping center just over a mile away and another tough critic of how the president is handling the shutdown.

NANCY WALLS: I just think it's an outrageous way to try to bully your way into something that you want.

GONYEA: That's Nancy Walls. She did not vote for Trump and says it's frustrating watching him put so many federal employees through so much with this extended furlough. She says this can all be resolved with real negotiations with Congress.

WALLS: It's childish, and do your job and resolve it the right way.

GONYEA: So far, these voters you've heard have all voiced strong feelings for or against the president. But Fran Burdette is different. We spoke downtown as a light but cold rain started to fall. She works at a Chillicothe law office. She voted for Trump and says this at the very start of our conversation.

FRAN BURDETTE: I truly believe that we do need a wall...

GONYEA: On that, she's absolutely with the president. But...

BURDETTE: ...But I don't think this is the right way to do it.

GONYEA: Burdette says Democrats share in the blame for the stalemate, and she worries about all those government workers not working. She admits she was a reluctant Trump voter in 2016 and says it's way too early to talk about her 2020 vote but that right now she does still support him. She closes with this...

BURDETTE: Yes. I mean, I am a supporter, and I just hope he does the right thing. But I also think the other side needs to come to the table, too. They've got to quit fighting.

GONYEA: And with that, the cold rain ended our sidewalk interview with no sign of a warming up in Washington any time soon. Don Gonyea, NPR News, Chillicothe, Ohio. 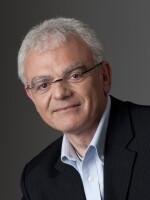 Don Gonyea
You're most likely to find NPR's Don Gonyea on the road, in some battleground state looking for voters to sit with him at the local lunch spot, the VFW or union hall, at a campaign rally, or at their kitchen tables to tell him what's on their minds. Through countless such conversations over the course of the year, he gets a ground-level view of American elections. Gonyea is NPR's National Political Correspondent, a position he has held since 2010. His reports can be heard on all NPR News programs and at NPR.org. To hear his sound-rich stories is akin to riding in the passenger seat of his rental car, traveling through Iowa or South Carolina or Michigan or wherever, right along with him.
See stories by Don Gonyea
Latest Stories