In 'Manhunt,' a virus turns anyone with enough testosterone into a feral beast

Editor's note: This review contains a discussion of topics some may find disturbing.

In an apocalypse where a virus turns anyone with enough testosterone into a feral, cannibalistic beast, who survives?

In Gretchen Felker-Martin's electric debut novel Manhunt, the book's nightmare world is populated with everyone left — mostly cisgender women, but there are also plenty of non-binary people, transgender men, and transgender women. Oh, plus a faction of authoritarian trans-exclusionary radical feminists (TERFs) slowly taking over the Eastern seaboard, killing trans people just as quickly as the infected beasts will. Told from a trans perspective, Manhunt is a fresh, stomach-turning take on gendered apocalypse.

To be upfront, Manhunt is not for everyone. It is gory, and brutal, and sickened me more than any other horror novel I've read in recent memory. I am sure it will challenge many trans readers (like myself) as much as it will challenge cis readers. I mean all this as a sincere compliment to Felker-Martin's work.

The book begins with Beth and Fran, two trans women on the hunt for feral men. In this reality, trans women, some non-binary people, and cis women who have polycystic ovarian syndrome — a condition that can increase testosterone levels — have few options for keeping their estrogen up. Synthesizing it from the estrogen-laden testicles of the beasts is one of these options.

Felker-Martin constructs the monsters of the novel beautifully: the men are "matted, filthy," "the skin flaking and greasy," mouths "dripping nameless dark fluid." They "[gulp] down meat in chunks" "like an alligator horking down a fish." They exist only to consume flesh and to rape, running in packs to chase down anyone that they can smell on the wind.

Beth and Fran's hunting trip goes horribly wrong. They are nearly taken down by a horde of feral men when they're helped by Robbie, a trans guy loner who had been luckily (or unluckily, depending on how you look at it) to be off his testosterone when the virus appeared. The three of them return to Boston (with harvested testicles in tow) to Indiresh, a cis woman fertility specialist that processes their estrogen, only to find that a militia of TERFs has rolled into the city. Afraid for their lives, Beth, Fran, Robbie, and Indi skip town when Indi is hired as a doctor at an underground bunker.

Simply put, the vibes at this bunker are off. The dynamics of the group only add to the unease: Robbie is squirrelly and avoidant, Indi is guilt-riddled and guarded, Beth is (understandably) an emotional wreck, and Fran acts only in her best interests. All are marked by the trauma of this world and of the one before it. The foursome's sexual entanglements heighten the tensions forming between them — messy queers will be messy queers, even at the end of the world.

Manhunt is a paragon of body horror, and its numerous sex scenes are no exception. The prose is simultaneously erotic and gruesome. Felker-Martin writes into dissociation and the dysphoric insecurities of her characters. In one of Felker-Martin's more sadistic choices, Beth is relegated to the "comfort" division of the bunker. In order to keep her place there, she's forced to work a job as a "daddy:'' a trans woman dressed in boy drag, pretending to be a man for the sexual pleasure of straight cis women. Thinking about it even now makes me full-body cringe. More than just being upsetting to read, this moment illuminates the treatment of trans women as sexual objects, regardless of how it affects them — even if it looks different from how this plays out in our world.

"This is a woman's body," Beth reminds herself after one of her clients leaves. "This is just a job. It's just a way to keep from being drawn and quartered by the Knights of J.K. Rowling."

And eventually, "the Knights of J.K. Rowling" do come for our protagonists, hard. While the feral men pose a hazard to them — and serve as portents of warning, should Beth and Fran run out of estrogen — the band of TERFs, called "the Legion," are the true villains of the book. In one scene, a Legion squad breaks into a house occupied by a group of trans women. The TERFs capture them, line them up in the back of the house, and take aim.

Ramona reduces the woman, again, to an object — calling her "it," a strategy used to delegitimize and dehumanize trans women in our timeline. "'We let it go, sooner or later it's going to come out of its skin,'" she continues. Then the killing starts.

However, Ramona — the book's fifth protagonist, a lieutenant in the Legion — is also shown to have a secret, ongoing affair with a trans femme. Like almost everything else in the book, this made me uncomfortable. There are several stories that attempt to make the perpetrators of violence against trans people more sympathetic by portraying their desires for us (ahem, Euphoria). But I think it's clear — to me, at least — that Ramona's desire for trans femmes doesn't make her sympathetic. It only illuminates how cowardly she is. She's still a villain, just a more complicated one.

It's obvious the point Felker-Martin is making with the Legion: While everything is heightened within the apocalyptic setting, enforcing gender kills people, That's true today; Manhunt just takes it to an extreme. And today's "gender critical" feminists, as gender theorist Judith Butler has written, are buying into fascism. The TERFs in the book, taken to an ideological end, were vital in amping up the core horrors of the book: the fear of not knowing what will happen to you when someone realizes you're trans, because they think trans people — trans women especially — already are monsters. The fear of a forced detransition, an irreversible one, that takes your entire personhood away. Felker-Martin brought these daily terrors to life in a truly bone-chilling way.

Even in places where it stretched the imagination, the book was grounded in the bodies of Felker-Martin's protagonists and in the logistics of their survival. Disgustingly rendered and brilliantly imagined, Manhunt was gripping as much as it was repulsive. It's rare to read a horror novel that truly tests my limits in a (mostly) pleasurable way — and Manhunt delivers. It's a challenge, and one I hope more readers take. 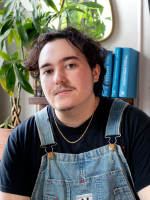 Liam McBain
Liam McBain (he/him) is an assistant producer on It's Been a Minute with Sam Sanders. He's interested in stories at the margins of culture.