King Gizzard and the Lizard Wizard released three albums just last month for a total of six records in 2022. Blake Daly is a musician and superfan of the band. We asked him to write about the band, their music and their fan culture.

Welcome to the Gizzverse.

With the release of Changes, the band's 23rd album, they have dropped six new albums in 12 months. While releasing so much material in a single year would be a daunting feat for the vast majority of modern artists, it only registers as a return to form for frontman Stu Mackenzie’s fervent musical fruitage. This album was originally intended to be the fifth release of 2017, but the band felt it was not yet ripe and gave us Gumboot Soup in its place.

October 28: Changes is a kaleidoscopic fever dream of tones and grooves

Changes year-long incubation has really paid off. Mackenzie has explained that the concept was fairly simple (each song is built around a pendulous key shift between two alternating scales with every chord-change), yet out of range for the band when initially conceived five years ago.

Each song on the album was spawned by a different section of the opening track, "Change," a 13-minute long blend of prog-rock and pop reminiscent of the ‘60’s and keyboards that sound like they were pulled straight from an R&B album. "Hate Dancin’" is a soft-spoken pop earworm, followed by the horn-punctuated, funk-adjacent "Astroturf." "No Body" is a rock ballad using its inside voice that descends into the synth-laden, driving beat of "Gondii." The smoky and mellow tones of "Exploding Suns" sound like it was meant for Sketches of Brunswick East, Gizzard’s 2017 collaboration with Mild High Club (which was this grateful fan’s on-ramp to Gizzverse).

"Change" and "Short Change" incorporate all of these vibes in a kaleidoscopic fever dream of tones and grooves that bookend the entire album quite nicely.

A borderless style with no care for “what sells”

It’s challenging to articulate why I love this band so much. I think it boils down to the ethos of the band musically and professionally, the fan culture, and of course, the music.

So much of what Stu, Ambrose, Joey, Cook, Lucas and Cavs have done is atypical for a modern band: The whirlwind releases creating a perpetual buzz, the borderless style weaving through genres like a downhill skier past guide rods on the slope, the range of complexity employed in their composition and the feeling that none of it was done at the behest of “the suits” at a record label pushing for more of “what sells”. This is, to me, the greatest marker of success: the ability to produce whatever you want and make a living from it. I love their no-rules approach to making music.

In my view, this band embodies the spirit of creativity in a time of content monetization and algorithmic curation. Their discography includes so much variety, from surfy garage rock to synth-pop, thrash metal to soft acoustic jams, psych rock to hip-hop, spoken-word narrative spaghetti-western cowboy ballads to spoken-word sci-fi apocalypse ballads.

I also love their DIY approach. Flightless Records was created by former second-drummer for King Gizzard and the Lizard Wizard, Eric Moore. The band made their own executive decisions regarding releases and ran their own operations regarding management, touring and merch. Moore resigned from the band in 2020 to focus on running Flightless Records. The band is now on its own label, KGLW records.

While their earlier releases went the more traditional route, including booking a professional recording studio to make a record, Mackenzie has become completely comfortable using his laptop to record official releases from the band’s warehouse studio in Melbourne, Australia. The success of these later albums suggests there is little need for expensive microphones, cumbersome rack modules or 40-channel Neve mixing consoles to make great music that people love. You don’t have to be rich or cutting-edge to produce great art!

In an era of social media algorithms and posturing, it's also notable the fan culture this band has created around itself. The fandom collectively is often referred to as “The Weirdo Swarm” by the band and the title is widely accepted by the fans. Similar to the way K-pop stans pour their fandom all over the internet, the Weirdo Swarm produces vast amounts of fan art, bootlegs, articles and memes to be shared and traded in forums, groups, and fan pages.

Before I traveled down the lizard hole, I want to note that I didn’t really understand Deadheads who discussed their favorite songs in terms of which live performance was best. Now, I would point you toward "Work This Time" performed live at Ancienne Belgique in 2019 over the album version on Oddments (2014). Y'all, I get it now.

Since joining the Weirdo Swarm, I’ve noticed so many similarities between other members and myself. (Yes, my significant other also tolerates my obsession with King Gizzard, but barely! I know your struggle.) Attending my first live show in Chicago last month, I saw myself in many of the other patrons. I did see at least ten people wearing the same yellow Mexico City 2018 t-shirt I was wearing, but I also saw hundreds feeling the same excitement I felt. Somehow, this does not make me feel typical or unoriginal. It only made me realize that I’m far from alone. In 2022, do not underestimate how important that moment was for me or can be for other music fans.

The band started off this year with the unfortunate cancellation of their Timeland festival, due to health concerns regarding the pandemic. This “ill-fated” three-day New Year's Eve party was to coincide with the release of their 19th studio album, Made in Timeland, a series of vignettes originally created as intermission music for King Gizzard’s live shows, merged into two 15-minute tracks set to a ticking clock (or 60 beats-per-minute). Die-hard fans would find a way to listen to Made in Timeland well ahead of the rescheduled date in March.

The second release of the year was Butterfly 3001, a collaborative remix of King Gizzard and the Lizard Wizard’s 2021 synth album Butterfly 3000. Butterfly 3001 features remixes and reimaginings by artists well-known to many audiences like the Flaming Lips, DJ Shadow and Peaches, as well as those one might call “emerging” or “alternative” such as Dam Funk, The Scientist or Geneva Jacuzzi. Both Made in Timeland and Butterfly 3000 explored a more synth-focused sound than the band had ever endeavored before (Though, endeavoring where they have not endeavored before is something of a staple with this group).

The departure from the guitar-centric music was not long lived though. By early March, the band opened the musical faucet and released "The Dripping Tap," an 18-minute ballad about the climate crisis featuring an orchestra of layered guitars, as well as Satanic Slumber Party, a collaboration EP with their fellow Australian rock/punk band Tropical F*ck Storm (TFS). Both tracks were developed from a session held at a cabin owned by TFS that came to be known as “Hat Jam”.

"The Dripping Tap" was the first single from Omnium Gatherum, the band's 20th studio album, which dropped on April 22, 2022. Omnium Gatherum features an array of genres both familiar and previously uncharted for Gizz, with multiple thrash metal tracks, hip-hop inspired rap tracks, and even some R&B tones. It’s the kind of blending and blurring of genres that can bring new fans to the band and fans of the band to new genres of music. By this time, King Gizzard and the Lizard Wizard had already begun intercontinental touring, with shows and festival spots in Europe, North America, South America and back home in Australia. Fans rejoiced in the new music they had already received and tour dates were selling out. While fans were still chewing on the cosmopolitan blend of Omnium Gatherum or desperately trying to score some tickets for the two-night show at Red Rocks in October (delayed since 2020), the band was preparing its coup de grâce.

On August 31, 2022, three new albums were announced via Twitter to be released within one month (October). The fan base erupted in theories and projections of what could be to come. These rumors would not be dispelled until the release of the first single, "Ice V," from Ice, Death, Planets, Lungs, Mushrooms, and Lava (IDPLML), the band’s 21st studio album.

IDPLML embraces the compositional turn for King Gizzard and the Lizard Wizard that started with "The Dripping Tap," emphasizing long-form jams in the vein of jam bands like the Grateful Dead or Phish. Each track from the album was written by a different member of the band, each assigned a tempo and a mode of the major scale to compose in, and refined as a group. Mackenzie calls IDPLML the band’s most “collaborative album to date.”

Each track from IDPLML carries the musical phenotypes of previously released material from King Gizzard, but it incorporates these snippets with a subtle wink rather than a neon sign. The approach is completely new for the group and the result feels paradoxically fresh and familiar.

While I was still processing the finer details of IDPLML, the perpetual motion machine that is King Gizzard and the Lizard Wizard dropped their 22nd album, Laminated Denim. Announced as a companion piece to Made in Timeland (you see the anagram in action, right?), Laminated Denim feels more composed than IDPLML, though it certainly jams. While also comprised of two 15-minute tracks ("The Land Before Timeland" and "Hypertension") at 60 BPM, the tone and flow of Laminated Denim is more akin to their prog-rock and psych-rock releases than the eclectic musical safari of Made in Timeland. The guitars are back in central focus, with riffing reminiscent of Radiohead. The opening line of the album is a familiar sentiment: “It’s good to be back. Re-railed. Back on track.”

Indeed, with Changes as the crowning jewel of yet another big year of releases, King Gizzard and the Lizard Wizard are hitting their stride once again. By the way, in case you missed it, the band also announced a U.S. Tour for 2023. Tickets go on sale Friday, Nov. 18 at noon central time. 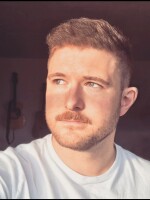 Blake Daly
Blake Daly is a Iowa City-based artist, musician, and producer with two decades of entertainment production experience in DIY and professional settings. His string band, Flash in a Pan, recently began working on their third album (in 10 years).