Swiss Meat and Sausage has been butchering animals and selling meats in a small, unincorporated east-central Missouri town for 50 years. Co-owner Janice Thomas wants to expand, and to do that, she’ll need more business from out-of-town customers.

“If there is one place that has some room, it’s with our online ordering,” she said.

The community of Swiss has minimal internet access: It’s not high speed, and it’s unreliable.

“When it goes down, we can’t get the orders,” she said.

It’s Thomas’ biggest barrier, and she’s not alone. A December 2018 study from the U.S. Census Bureau shows rural counties have significantly less access to high-speed internet; in 2016, the Federal Communications Commission said 39 percent of rural Americans are without it. Missouri has 30 counties where more than a third of homes and businesses do not have access to high-speed internet service; Illinois has 14, Nebraska has 8 and Colorado has six.

There’s no single, unified effort to resolve the problem on federal, state or local levels, making it tough for businesses looking to move in and economic development more difficult for regions that need to attract those jobs. 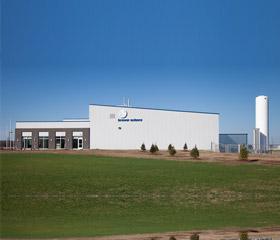 Brewer Science, a microchip manufacturer in Rolla, Missouri, found that out firsthand when it tried in 2013 to build a new manufacturing plant in the nearby, but small, town of Vichy.

“The infrastructure situation was a mess,” network administrator Ron Chinn said, adding that water and electricity were easy, but it took a lot of work to get an acceptable level of internet access.

“It did force us to redesign how some of our manufacturing systems worked to tolerate internet outages,” Chinn said. “We also added a backup connection from a wireless ISP (internet service provider), which is just the bare minimum we need to continue production.”

If it weren’t for the commitment of Brewer Sciences owner Terry Brewer, who is from the area, Chinn said the company wouldn’t have done it.

No single savior in sight

Rural areas faced a similar technological problem century ago — the lack of electricity. But the federal government stepped in during the New Deal with the Rural Electrification Act of 1936, which essentially created electric co-ops to string up power lines and consolidate distribution points.

“When it happened, people began to do commerce better, it allowed them to move product from the farm to the city,” according to University of Missouri Extension Director Marshall Stewart. “Broadband today is what rural electrification was nearly 100 years ago.”

But despite overtures from President Donald Trump and Agriculture Secretary Sonny Perdue in the last two years about the importance of widepsread broadband, Stewart said there won’t be a concerted, centralized push.

“The idea that there is going to be a sweeping, federal effort to just fund broadband for the country, that’s probably not going to happen wholesale,” Stewart said. 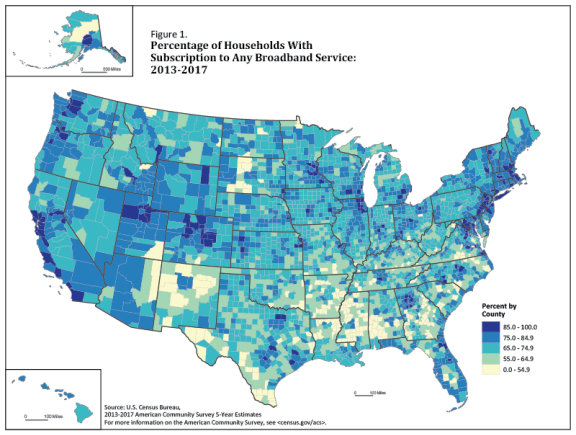 That said, the USDA announced in December it is offering $600 million in grants and low-interest loans for help expand broadband in rural areas; applications are this spring and summer. That’s on top of more than $700 million put toward in other federal rural broadband programs in first two years of the Trump administration.

Some states also have grant and loan programs. For example, Missouri Gov. Mike Parson proposed $5 million in rural broadband assistance during his January State of the State address, and in Iowa, Gov. Kim Reynolds requested $20 million for rural broadband in her Condition of the State message.

But until there is improved technology to make it easier and cheaper to expand broadband in rural areas, businesses will have to rely on other agencies — like ISPs, electric co-ops and local governments — to apply for the federal money.

And there’s more at stake than just economic development, according to Tim Arbeiter, who is the Director of Broadband Development for the Missouri Department of Economic Development. It’s an office that is only six months old, and they haven’t yet developed a plan on how to specifically help businesses like Swiss Meat and Sausage or Brewer Science.

He said high-speed internet issues is the part of threat to the small-town way of life in America. It affects schools, health care and access to government services — ranging from appealing property tax bills to finding out the location and hours of offices.

Plus, agriculture isn’t stuck in the past: Tractors are wired with internet access to help plant and harvest, and some farmers are using field-monitoring apps that can find and identify problems like damage from disease and pests.

“The next generation is saying, ‘I need better connectivity, Mom, Dad, Grandma, Grandpa, in order for me to take over the farm,’” Arbeiter said. “It’s another thing, and a major thing, that is driving young people away from rural areas and toward urban life.”

The U.S. trade war with China has created a financial burden for farmers and companies that import Chinese goods. Consumers, on the other hand, have mostly been spared from the conflict.

That could all change if this month’s negotiations between the U.S. and China don’t go well.

Woodbury County supervisors on Tuesday approved an ordinance to ensure large trucks don’t apply loud compression brakes on some county roads, but critics of the ordinance still believe it is unenforceable.

At The Law Shop in Van Meter, attorney Amy Skogerson untied a piece of blue yarn from around a bunch of craft sticks.

Each stick had a word or short phrase stamped on it, and she read from them as she placed them on her desk: “negotiate, court representation, research law, draft documents.”

How Some Small Towns Are Achieving 'Brain Gain'

When communities watch young people grow up, go off and never return, remaining residents and politicians often bemoan there’s been a “brain drain” — especially when such population loss means schools and businesses close.

But plenty of residents are full of love and pride for those communities, and some are working to identify their towns’ best attributes so they can attract new residents and achieve “brain gain.” This effort is happening across New England and in the Mountain West, and is also evident in two Iowa towns.