Growing up, FlyLife’s mother, a reverend, would often instill in him this guiding principle: “Be brief, be brilliant, be gone.”

FlyLife’s catalog is a monument to this idea. He's released nearly a dozen EPs and collaborative projects, all weighing in at under 30 minutes. Strong, concise club records with well-defined themes and infinite playability are FlyLife’s bread and butter.

“So that’s how I was always moving,” said FlyLife. “I’m gonna give y'all anywhere from five to ten slaps—quick. Then get on. I don’t want to try to take too much time.”

For five years, FlyLife has followed this recipe - brief, but brilliant. From the enduring success of singles like 2018’s ”Hockey Puck” and 2020’s “Exotic Options (prod. 64Cityy),” to his second collaborative album with rapper Sqvce in 2021 – a barely 20-minute vehicle ofr instant classics, including “Henn & Wine” and “Cam Rack$” – FlyLife has proven himself a gifted hitmaker with a sauce that lasts.

With his latest project, "A Different View," FlyLife fights every instinct telling him to “be brief” and makes exciting use of the almost hour long runtime by doing the unthinkable — taking a breath. Of the album’s 19 tracks, a healthy percentage tilt R&B, which is a welcome surprise from the same mind that penned “all we know is re-uppin’ and move again / all we know is reloadin’ and shoot again” in “For the Hooligans.”

“I feel like there’s several sides of my artistry on this project,” said FlyLife. “I’ve been making R&B songs for some time, I just never… I never really had enough room to release them. Or I didn’t feel like they fit, or I didn’t feel like the sound was always there. But now, I feel like I [am] ready. It took everything that I’ve made up until now to fully find my sound and find how I want to come across in music.”

Most of the R&B tracks on the record involve producer Cartier Cookin’, whose soulful production added a dimension previously unheard in FlyLife’s music. With smoother tracks like “Slow it Down” (featuring Carousel Studios producer Arthvr) and “See it Through,” the pair was able to soften the edges of an otherwise tougher project.

For fans of the trap elements synonymous with FlyLife and the collective Us Vs. Them (U.V.T.), the album delivers on that too.

Having never broken 30 minutes on a record, let alone 58, FlyLife found himself in the middle of an album-sized playground. Careful consideration was paid to the pace of the record, as well as the balance of intensity across all songs. Mostly though, it had to pass the club test.

“If you give them too much,” said FlyLife, “if it's too turnt, like for too long, you just gas people out. And I kind of just learned that from watching [DJ] T-Max DJ. When he's DJ-ing he might give you boom, boom, boom, boom, all turnt. Then he's gonna kind of change the vibe. So you can calm down, get a drink, maybe communicate with someone else. And then you go back into it. So that was kind of the way I was thinking about it. You can ride the wave all the way through.”

All the songs on "A Different View" fit into what FlyLife calls “pockets.” There’s an R&B pocket, a traditional hip-hop pocket and another pocket of boundary-pushing sounds that challenge convention. Many songs fit into that last category, like “Oceans Thirteen (feat. Teller Bank$ and Pyko Da Syko)” which feels like an underwater rap battle and “Enormous (feat. Dominic Harrington)” which is bold simply because Dom, a musical recluse, showed up.

One of the most interesting songs, deemed the album’s “curveball” by FlyLife, is “New Paper,” featuring That Honorroll KID. The song capitalizes on the waviness of the track prior and, in the album’s sixth slot, successfully shifts the vibe from ‘turnt’ to something else entirely.

Other standout tracks include “You Should Try It (feat. Ace Forgiato),” “Complete the Mission (feat. Sqvce)” and “450s.”

For those familiar with Des Moines hip-hop, the appendix “(feat. FlyLife)” is as popular as it is reassuring. A FlyLife feature is a guarantee of excellence, of unmatched energy and of next-level lyricism. So, when it came time for FlyLife to strap into the driver’s seat himself, there was a long line of rappers waiting to return the favor.

“We had a big session on my birthday,” said FlyLife. “The majority of the homies came through and just knocked out their verses that night. We were just having a good time.”

FlyLife recounted an exchange with U.V.T.’s Vin following his verse in the booth that evening. Vin, whose mushmouthed delivery and slippery cadence make him one of the group’s most magnetic and unpredictable weapons, took no prisoners. On “Expensive,” the album’s twelfth track, the Vin missile is deployed with 100% accuracy and his dominant performance punctuates the song.

“There’s about ten [expletives] in the studio right now,” said Vin, in the waning seconds of the song’s outro, “and I just went harder than everybody. I ain’t even talking no shit.”

“He did that and just left,” said FlyLife. “He did that and we were all sitting there listening to the songs… and then we was all like, dang, he did that. And he was already gone by the time we heard it.”

The apparent diss, not lost on anyone in the studio that evening, was universally permitted. Moreover, FlyLife fought to keep it on the tape.

“I talked to Arthvr, I was like ‘Nah, leave it in there, bro,’” said FlyLife. “It’s a true depiction of the culture. I believe that hip-hop is still a contact sport. Everybody wants to give out participation trophies and everything, but it’s really not that. When you get into a room with somebody and you’re making music with them… If you’re a great artist it’s gotta be like some iron sharpens iron. It’s almost like a boxing match and y’all are sparring.”

“I love all the homies to death,” said FlyLife. “But I want my verse to be better than theirs, and I know they feel the same way. You shouldn’t want to get on a song and be like my performance was lackluster. You should want to be, like, I had a great performance. Or I didn't take nothing away when I brought the feature to him, I only added to the song.”

A lot of U.V.T. is present on the tracklist, with features from Ace Forgiato, Sqvce, Vin, Dominic Harrington, Coach Dave and Juliano Dock. Other features include TC, Teller Bank$, That Honorroll KID, Arthvr, Cartier Cookin’, Pyko Da Syko and even a brief appearance from FlyLife’s older brother Mello Dirty Money on the inescapably catchy “Worried About” and its remix.

On Thursday, 24 hours before the release of his new album, FlyLife dropped an entirely different project: a burger. Available for one day only at Lachele’s Fine Foods on Ingersoll Ave in Des Moines, the McFlyLife (patent pending) was the hottest selling item that day—eventually selling out entirely.

So, what is a McFlyLife? Two potato buns––one half slathered with peanut butter, the other with pepper jelly––bookend a sandwich that includes crispy bacon, a fried egg, melted American cheese and a Lachele’s signature smashpatty. The first three customers to order the McFlyLife were also gifted flash drives containing advanced copies of the album.

“I don’t know, it’s not something normal,” said FlyLife. “But that’s the thing. We have to bring these cultures to Des Moines. In a larger city, this is probably something they’ve already seen before. Someone having a burger. But, hopefully every rapper in Iowa does get a sandwich now.”

FlyLife will be performing his new album live at Wooly’s May 28 at FlyLife And The Fam. Tickets are available at the Wooly’s website. "A Different View" debuted everywhere May 13. 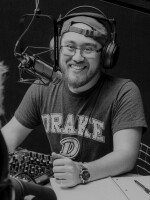