I recently watched the 2021 documentary “Summer of Soul” on Hulu, and you should too. This Black music thing? There are layers to it.

My heart remains tender having witnessed us, as Black people, in fellowship at the 1969 Harlem Cultural Festival for such an eclectic lineup, including Mahalia Jackson, Stevie Wonder, Nina Simone, Gladys Night & the Pips, and so many more. From "To Be Young, Gifted and Black" to "My Girl," every genre was a vibe.

I’m particularly affected by the segment centering the Edwin Hawkins Singers and their song "Oh Happy Day," released in 1969. The choir members recount that despite the song’s warm reception by clubs and radio DJs, they received antagonism from gospel music lovers and the Black church at the time. Their story weighed on my heart as I later watched BET’s broadcast of the 2021 Stellar Awards this August.

Lady Tramaine Hawkins, a member of the Edwin Hawkins Singers, was awarded the Aretha Franklin Icon award this year. Presenter Kirk Franklin relayed her legacy to the audience, sidestepping any of the struggle I perceived watching “Summer of Soul." It’s significant to see Lady Tramaine’s presence at pivotal moments in gospel music history celebrated in a potentially revisionist manner, as if any of the Hawkins’ contributions to gospel music were always welcome.

What is welcome? From the 1969 Harlem Cultural Festival to the 2021 Stellar Awards, I witness the fluidity with which gospel music is continuously stretched and shaped in order to be welcome in sacred and secular spaces alike. Gospel music is Black music, first and foremost, as demonstrated by its ability to resonate with Black people irrespective of relationship to the Divine.

Ain’t No Party Like A Holy Ghost Party: The Playlist

How closely we choose to cling to the idea of a sacred-secular divide in Black music impacts the depth with which Black experiences can be authentically communicated. With so much at stake, let’s imagine what liberation looks like, mine and yours, with Black music informing our lens.

I created a Spotify playlist of gospel, funk, hip-hop, jazz, and neo-soul songs by Black artists dating all the way back to 1954 in order to demonstrate that Black music, irrespective of its ultimately arbitrary sacred or secular designation, is continuously in conversation with itself.

I structured the playlist such that a gospel song is succeeded by the secular song(s) it has either influenced or been influenced by.

“'Gospel music & 'The Gospel' are two different conversations,” he says. “The Gospel is one of theology— Gospel music isn’t as married to theologies (or theological consistency) as we’d like to believe. Gospel music is willing to abandon theological coherence to highlight Black experiences," Joseph Vann-Jones, a voice in Black Religious Music & History, wrote on Gospel music.

This “Ain’t No Party Like a Holy Ghost Party” playlist leans into this idea. Given that context, I feature quite a bit of Kirk Franklin’s catalog on this playlist. Consider the opening of Kirk’s 1997 song “Stomp (Remix)”, received with mixed reviews upon its release among churchgoers and clubgoers. He begins:

“For those of you that think gospel music has gone too far/
You think we got too radical with our message/
Well, I got news for you, you ain’t heard nothin’ yet/
And if you don’t know, now you know, glory, glory”

He acknowledges the tension between the sacred/secular divide from the jump, just before the rhythmic motif of Funkadelic’s “One Nation Under a Groove” enters four seconds in, adding fuel to the already hot (hell)fire. Alas, a gospel song informed by a funk song – or is it?

The singers begin "One Nation Under a Groove" with:

This Black music thing? There are layers to it.

The creative approach here is reminiscent to that of Ray Charles’ “I Got a Woman," released decades prior in 1954. Instead of secular-informed gospel music however, “I Got A Woman” is a rearrangement of the gospel song “It Must Be Jesus” by the Southern Tones. Its release was well received by the rock-n-roll crowd while challenging the religious sensibilities of church folks. In the spirit of breaking down the false sacred/spiritual divide, it’s worth noting that this gospel song, which was rearranged into Ray Charles’ secular song, was sampled in the 2005 hip-hop song “Gold Digger” by Kanye West, a hip-hop artist who has since incorporated gospel samples into his repertoire (see the nod to Pastor T.L. Barrett and the Youth for Christ Choir in “Father Stretch My Hands Pt. 1”, as well as the gospel-R&B hybrid Sunday Service Choir projects). There are indeed layers to this Black music thing.

Black music is a testament to Black radical imagination. I’m in awe of how we stretch and queer and genre-bend in the name of liberation. With gospel music specifically, I love to catch borrowed R&B and hip-hop elements in the way gospel soloists ad-lib.

Consider “Stranger” by the Donald Lawrence & The Tri-City Singers (02:40), when the soloist riffs “Whatta man, whatta man”, a play off the eponymous song by Salt-N-Pepa and En Vogue. Or when Tonéx/B. Slade riffed “Whatever you want from me / I’m giving you everything” (03:14), a nod to Whitney Houston’s "I’m Your Baby Tonight."

It’s critical that we abandon the idea of a sacred/secular divide as it pertains to Black music. This art form is expansive enough to honor our experiences of Black faith, and non-faith, joy, struggle, sexuality and love.

I sit with Vann-Jones’ insistence that gospel music prioritize Black experience over theological coherence. The demonstrated overlap in how we express our relationship to the Divine and to ourselves and loved ones by way of ad-lib affirms the inherent divinity that is found in Blackness. Black music in tandem with Black radical imagination is our liberation. 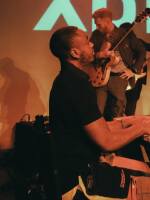 Allen Juneau
Allen Juneau is a pianist, organist, composer, and gospel music enthusiast based in Des Moines, IA. He is a graduate of Harvard University and currently completing a Master of Music in Film Scoring through Berklee College of Music. It is his delight to create and educate from his home music studio, Cadenza Sound Salon. Follow his creative journey @allen.juneau.