80/35 is one of the biggest musical weekends of the year for Serious Music People in Iowa. Unfortunately, due to the pandemic, the festival isn't happening this year. Until next year, we'll have to get by with our memories of festivals past. Here's some of our favorites.

The first 80/35 Festival I attended was 2010, with memorable sets on the first day from Yo La Tengo and Spoon. On the second day, it rained a lot. A couple of the festival sponsors had thin plastic ponchos available, and those were everywhere. The rain stopped late in the day, giving festival goers a chance to dry out a bit.

I remember standing on the street among the venders and the crowd as the evening sun broke through the clouds. This was shortly before second night headliners, Modest Mouse, took the stage. The grassy area in front of the stage was packed (imagine that.) I looked back from there, and was amazed at the size of the crowd. For some unknown reason, Modest Mouse were maybe twenty minutes late for the set. Finally they came on, and frontman Isaac Brock explained that the band just had to catch (indie cult figure) Holly Golightly’s set on another stage. They proceeded to do a great show, and I thought “this is a cool festival.”

In 2014, I was starting a set with Pert Near Sandstone at the IPR Live Sessions stage. As we were about to begin, Ziggy Marley, who we’d been told was going to wait 20 minutes or so before going on, decided to start. I couldn't’ hear the band I was mixing, and the band couldn’t hear themselves. But their performance was good. They were just that tight.

That same year, my boss, Al Schares, tried to clear some standing water on stage with a snow shovel. That was entertaining. I should mention that the stage was a street corner, and the water was being kept where it was by 220 volt power cables. I’m not sure how smart we were that morning.

Overall, I’m struck by how much talent we have in Iowa. And, I’ve been pleased with the road bands who come down to our little party and find that, sometimes, they enjoy it more than the big stage they were on.

The first year of the IPR Live Sessions stage was 2014, and frankly, it was a bit of a hot mess. We were located right outside the entrance to the main stage, so we spent all weekend competing with the sound coming from that area. We featured a total of eight bands at our stage over the course of two full days, several of whom were not booked ahead of time. I distinctly remember watching Foxholes perform at one of the side stages, then practically begging them to grab their guitars and play for us after their set.

One of the bands we managed to book ahead, however, was the indie rock band Dr. Dog, who’d achieved some level of fame by then, after years of touring and seven albums. They were scheduled to play later on Saturday on the main stage, and were going to be in town early enough to play a set for us. We were pretty excited to have snagged such a big “feather in our cap” in our first year.

Dr. Dog arrived on time, clearly having just spent hours in their van. A small crowd had already gathered, and more people arrived as the band started warming up on the instruments IPR kept on hand. After a quick soundcheck, Dr. Dog played about a 15-minute set of some of their more well-known songs, including “That Old Black Hole” and “Lonesome.” The crowd loved every minute of the performance, and the band was kind enough to hang around for a few minutes to shake hands, take pictures, and so forth.

The IPR Live Sessions stage has only gotten bigger and better in the years since then, but I’ve still got fond memories of that shaky first year, and I’ll always be grateful to Dr. Dog for being willing to give IPR a chance to make it work.

Often at 80/35 we haven’t had a chance to hear a band live or see them perform before presenting them on our stage. This particular evening we were at the end of the schedule for the day. I didn’t know much about the band that was showing up to play, as they were from a large Midwestern city and hadn’t played Iowa much prior to their appearance at 80/35. They showed up a little late as I recall and didn’t seem to fully understand what we were up to at the IPR stage. So as we’re getting them set up, there’s a bit of a disconnect.

It’s hard to put into words, but at a certain point the staff gets a feeling about the way a set is going to go, and by the time we were ready for them to start there was a little uneasiness setting in. It was either the bass amp or one of the guitar amps but, at any rate, it was acting up so it was a rough start. A song or two in, as I recall, I was seeing my radio career flash in front of my eyes. I was pretty sure this would be the last act we’d be presenting at 80/35, and I began to wonder how bad a career in telemarketing could be after all. There were technical issues, language issues, and even some friction with one of the audience members whose patriotic attire had attracted the attention of the lead singer. My memory tells me they had differing views on the world.

At this point the headliner for the night began next door on the main stage. The generator we were using for our stage (in the pocket park next to Starbucks in those days) couldn’t keep up once the PA on the main stage really started cranking and the light show began. The light show (a term I use lightly) on our stage dimmed considerably. The power drain caused the guitar amp that was giving us problems earlier to completely fry, and I believe a number of components in our PA setup could not function with the lower than recommended voltage we could give it. The PA soon went dead. We hurried frantically in the hopes we might find a solution and, eventually, after several minutes, things came back. The band began again, louder and with more attitude than before, but our second chance only lasted about 45 seconds. It looked like it might come back again but there were too many components that just would not boot up again.

We tried to start things up another time or two but soon it became obvious that our part of the night’s festivities were over. To put an exclamation point on the whole thing, the singer came off the stage and violently smashed the guitar he’d been playing on the asphalt to the delight of those lucky few left in attendance.

To my surprise, the singer and the patriotic music fan sat down on the asphalt in the middle of the shattered guitar parts and sorted things out. They sat there for an hour or two as we finished tearing down our PA and equipment and wrapped up another 80/35 Festival.

I am admittedly not a seasoned 80/35 veteran, but I did have a euphoric experience at the Kum & Go stage in 2018. I had my first “phoritto,” courtesy of Des Moines’ Banh ME truck (SO good), and discovered Nnamdi Obgbonnaya at the same time. I can’t wait to try to balance my bad dance moves and arms full of snacks in the Iowa summer sun again. 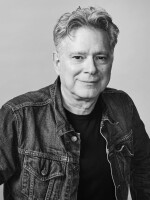 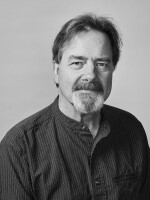