Add These Songs By Iowa Artists To Your Halloween Party Playlists

Think October is the best month of the year? You're not alone.

As you breathe in the smell of the falling leaves and wrap your hands around a cup of apple cider wearing your favorite flannel, take heart knowing there's a camp of Iowa based musicians who have written and recorded you the perfect soundtrack.

Here's a playlist of some of our favorites, with some notes about a handful of the tracks we included.

The Envy Corps had been on a hiatus since their show at Hinterland 2015, until they released two new tracks this spring, including "Sour Patch." https://youtu.be/CH5UsFnNuJc" target="_blank">The song features a mellotron and a linnstrument, which contributes to the track's nightmarish vibe.

"Time Beach Universe" is a new album out recently from Grinnell based lounge pop band Pink Neighbor.  The track "Ursula's Fingers," which is on that new record, is an instrumental track with a creepy tone atypical for the group.

The track "Sweet Tooth" is a new single out this fall from the Des Moines hip-hop group LAV.ISH. It's a great dance party track with big beats and a catchy hook.

"Bat Chain Puller" by William Elliot Whitmore is a cover of a Captain Beefheart track. It seems fitting to point this out during a season notorious for the weird and the eerie. Captain Beefheart was a part of Frank Zappa's band for a stint and put out some of the weirdest music of all time. If that's your thing, google Captain Beefheart and dig in.

"Ghost" by Lily DeTaeye is a new song that she wrote last year on Halloween, according to a story she told at her record release party at xBk, a new music venue near Drake University. The song is on the new record "BiTe Back" that was released just last week.

Did we make a glaring omission? We want to know what tracks you'd add to this list too. Tweet us @IowaPublicRadio using the hashtag #IPRMusic. 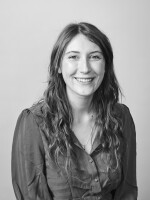