Former Chadron State student Caleb Tegtmeier had been on track to represent the northwest Nebraska school on the state college board. But he lost his appointment after multiple women accused him of sexual assault. In June, a judge ruled Tegtmeier must stay away from two of the women.

Ricketts had chosen Caleb Tegtmeier to represent Chadron State on the Nebraska State College Board of Trustees in January.

Now the governor has revoked the appointment and Tegtmeier has withdrawn from the school and moved out of the area, according to Chadron State and Tegtmeier's lawyer.

In a court document describing evidence for an April hearing, the women’s lawyer said three other female students allege they also had similar experiences with Tegtmeier.

Harford wrote: “It is clear to the Court that the Respondent [Tegtmeier] prays [sic] on vulnerable female students and takes advantage of them sexually under the guise of being there to help and support them,” in one decision to grant protection. No criminal charges have been filed.

Tegtmeier's attorney did not respond to multiple requests for comment.

Tegtmeier is challenging the basis for the protection orders and is asking the judge to vacate the orders. In a hearing on June 27, regarding one of the bans on contact, Rebecca Chasek, Tegtmeier’s lawyer, argued he did not act without the woman’s consent and halted sexual contact once she asked him to stop.

“It is clear to the Court that the Respondent [Tegtmeier] prays [sic] on vulnerable female students and takes advantage of them sexually under the guise of being there to help and support them.”

Danielle Larson, the attorney representing the two women accusing Tegtmeier, said her client had “repeatedly set boundaries with Caleb, and he repeatedly pushed against those physical boundaries. She told him it was not OK and he’d push again.”

Harford rejected Tegtmeier’s characterization of consent when he decided to overrule the motion.

“The Court does not agree with the assertion by Respondent [Tegtmeier] that an aggressor can initiate sexual contact with another and until the recipient of that contact says ‘stop’ that the initial contact was consensual,” the judge wrote.

Ricketts put Tegtmeier’s nomination to the state college board on hold after Chadron State’s school newspaper wrote about the accusations made in court. The governor has now revoked the appointment. A spokesperson said Ricketts wasn’t aware of the allegations against Tegtmeier when he made his pick.

“Working as a Student Trustee would allow me to voice the views and opinions of the students of Chadron State. I want to give the Board of Trustees an honest view of the College, as whether positive or negative, they deserve honesty and hard work from a Student Trustee,” the then-sophomore wrote in his application to become the board’s primary liaison with Chadron State students.

Tegtmeier is the son of Elizabeth Tegtmeier, who is running to represent most of western Nebraska on the state’s board of education.

"While my son disagreed with the allegations and the process at Chadron State, it's better for everyone if he moves on so that all of the students can get the best possible education," Elizabeth Tegtmeier said in an emailed statement. "My commitment to serving Nebraska's schools, students, and teachers on the Nebraska State Board of Education has not wavered and remains strong."

A spokesperson for the college system and Chadron State said the two organizations would find a way for the northwest Nebraska school to be represented on the board of trustees.

In a statement, the spokesperson declined to comment on specifics, citing regulations that protect student privacy, but said "The Board of Trustees for the Nebraska State Colleges and Chadron State College take all reports of sexual harassment and the safety and well-being of our students seriously."

This story comes is a collaboration with the Midwest Newsroom, an investigative journalism partnership including IPR, KCUR 89.3, Nebraska Public Media News, St. Louis Public Radio and NPR. For more in-depth news from Iowa, Kansas, Missouri and Nebraska, we invite you to follow us on Twitter. 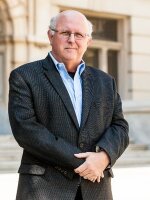