When 19-year-old activist Oluwatoyin Salau went missing in early June 2020, Noname was one of many who helped spread the word on social media. The rapper shared details of Salau's disappearance, along with Salau's own tweets detailing her assault just days before going missing. Sadly, the teen's body was found soon after and Florida man Aaron Glee was charged with her kidnapping and murder, reigniting discourse about the protection of those at the frontlines of uprisings. On "Song 33," this is fresh on Noname's mind as she spits over Madlib's jazz-laced beat about a blindspot in the movement for Black lives: Black cis and trans women.

"I saw a demon on my shoulder / It's lookin' like patriarchy," the Chicago lyricist raps in her signature mellow voice. She blames our male-dominated society for Salau's death — committed by a Black man, who the teen's protests sought to protect — and the invisibility of Black women who are victims of violent crimes, which is so severe that the #SayHerName campaign was created to bring awareness to their deaths.

And yet, J. Cole is "quiet as a church mouse" regarding this adversity, as Noname sees it. On "Snow on tha Bluff" — Cole's first release after George Floyd's death, released two days before "Song 33" — he addresses an unnamed young woman who tweets about white supremacy, capitalism and the disproportionate media attention received by Black male victims of police brutality, only to criticize her tone. Given Noname's now-deleted tweet about rappers whose "discographies be about black plight, and they nowhere to be found" during the uprising, and her highlighting works that "speak on human conditions," the subject of Cole's observations is easy to decode.

"It's trans women bein' murdered and this is all he can offer?" Noname raps, admonishing the platinum-selling, so-called conscious rapper for not being cognizant of the triviality of his focus. The artists' exchange (and its accompanying social media uproar from rap fans and critics) exemplifies how the "new vanguard," as Noname describes it, distinguishes itself: No matter how many thought-provoking albums you sell, you can't support the movement without actively supporting its women, lest you fall victim to a barrage of angry tweets — or a coolly-toned clapback by Noname. 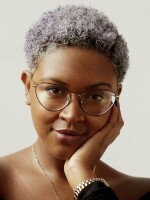 Keryce Chelsi Henry
Keryce Chelsi Henry is a writer and editor from Queens, N.Y., whose work has appeared in NYLON, NPR Music, Forbes, and more. In addition to covering music, she works with startup companies to market their brands through storytelling.