NPR Goes Beyond the Streets In NY

Curated by graffiti historian and urban anthropologist Roger Gastman, BEYOND THE STREETS examines the fundamental human need for public self-expression. Showcased in Williamsburg, Brooklyn, the exhibit features artists with roots in graffiti and street art whose work have evolved into highly disciplined studio practices, alongside historical cultural figures inspired by this art form. The art world is often categorized for the elite and privileged, while graffiti is known to be accessible to the masses, a fundamental pillar of hip-hop culture and as a vehicle of expression for all.

Abby O'Neill, NPR's Senior Manager of Strategic Initiatives for NPR Music facilitated a media partnership with , the largest graffiti and street art exhibition in the world. This year, the massive festival took place in New York showcasing the work of over 150 artists from around the world, who are continuously redefining and reshaping the art form. BEYOND THE STREETS continues to celebrate society's most pervasive mark makers to explore the collective urgency of using the street as a canvas for expression.

Tell us a little about the inception of BEYOND THE STREETS?

I've been involved in these art forms more or less all my life, but I guess it mainly started almost a decade ago when I was asked by Jeffrey Deitch to help assist with curating his first show at MOCA, Art In The Streets. This was the first major museum showcase of graffiti and street art, so it was a big deal. The reception was incredible: it was the highest attended show the museum ever had. It showed me the interest was there at a major level. But for a few different reasons (mainly political) that show never traveled. So we set out to create our own museum-level presentation of this art form, but without the constraints of an institution. It was important that we could tell our story how we wanted, which is to showcase the origins and evolutions of graffiti and street art.

Describe your creative process when curating BEYOND THE STREETS. Did you ever find yourself stuck creatively or did the process instinctually flow?

Each city has a unique story with these forms of public art, so we don't take a templated approach. The Los Angeles exhibition has a different roster—and feels much different—than New York. Thankfully, I've gotten to know most of the artists in the show throughout their careers. It's a pretty organic process to determine what stories we want to tell and what ends up going where. I also have an amazing team that I work with that are experts at helping to tell these stories in a really cohesive way.

All of the artists featured in BEYOND THE STREETS are rule-breakers, pioneers, and mark-makers in their own right. What have you learned from them as it relates to the art of disruption?

These artists inspire me everyday and drive why we're working so hard to tell their stories. In our own way, what we're building with BEYOND THE STREETS is also an act of disruption. Much of the history and nuance of graffiti and street art is not known and has never been presented in this way, so we went to great lengths to do it the right way, in our own way.

What has been one of your biggest takeaways throughout your years of preserving the history of graffiti and working with a variety of artists?

Street art continues to be a vehicle to express political and socio-economic issues, how has that changed throughout the years?

People have always taken to the streets to voice their opinion, and many of the physical mediums stay the same: spray paint, markers, billboards, wheatpasting. There is a fundamental desire to communicate with the rest of society that never dies despite the rapid changes in society and technology.

But, technology enables creativity in insane ways. For example, the 1UP Crew from Berlin created a work of living graffiti on the ocean floor in Bali as a way to draw attention to climate change's devastating impact on the world's coral reef populations.

Gastman first staged " BEYOND THE STREETS" in a 40,000-square-foot Los Angeles warehouse last spring and now, the New York edition is even bigger. The exhibition takes over two floors with over 100,000 square feet in a large office building.

What first caught your eye about the concept of Beyond The Streets?

I had the honor of attending Roger's first major graffiti exhibition, Art in the Streets, at the Museum of Contemporary Art (MOCA) in Los Angeles eight years ago, which he co-curated and produced with Jeffrey Deitch. I was floored. The first major comprehensive graffiti exhibition, the show itself was a sprawling visual masterpiece. Graffiti is an art form that has traditionally been overlooked by large museum and gallery curators. Roger and Jeffrey brought this outsized and open art into a condensed, meticulously crafted venue where people could sit and talk, eat, drink and then wander into the museum, which housed a wonderfully curated exhibition. The combination of indoor and outdoor space for art and community combined to create an experience people would wait months to see. The response to this was extraordinary, and it became the mostly widely viewed exhibition in the history of MOCA with one of the most diverse attendances.

Roger's newest chapter, the multi-city street art show, Beyond the Streets, launched last spring in Los Angeles. It took nearly eight years of effort to produce and the NYC exhibition opened this June in Brooklyn, spanning 100k square feet. NPR recognized the cultural impact of Beyond the Streets and launched a co-branded media partnership in conjunction with our member station WNYC.

Graffiti was initially regarded as a criminal offense – vandalism – and its vibrant design element became a visceral draw to people – appealing to inner city, suburban, and even rural communities. It also challenged the traditional arbiters of what was meaningful and what was important in art. The identity of the artist – his/her name or moniker in graffiti - was designed to be a part of the art or its entirety. The artist as the star of his own making – not because he depicted something but because he existed and saw himself as an artist in that community.

The strength and appeal of the art form has begun to transform the public's perception of it from an illegal defacement of public and private properties to an acknowledgement of urban culture and the connection of the community to its environments. Miami's trendy Wynwood Walls is now one of the city's most popular tourist attractions.

Art influences social change. It expresses the journey of the artist and the community's effect on him or her. What makes it compelling is the personality and emotion expressed by the individual and the content informed by the artists environment and influences within and without the community. Evoking current socio-political issues, civic discourse and cultural touchpoints – it informs its audience of what's going on in the world, the region or down the street. Art provokes emotion as well as thought often with a new or differing viewpoint. Art is the expression of an individual's essence and the artist expresses the influence of his community. It makes the world turn.

What was the first work of art that had an impact on you?

It's difficult to pinpoint a specific piece of art that impacted me. It was probably something my mother created. I was lucky to be surrounded by visual art in my childhood. Both my great-grandmother and grandmother painted, and my grandfather was a collector and started The Friends of the Corcoran Gallery of Art here in D.C. My mother, who was a fundraiser, was also hands deep in some medium (paint, pastels, collage, etc.) or some form of design (from fundraising brochures to gardening) when I was growing up. My sister and I were surrounded by art and imbued with the importance and celebration of visual expression.

I had a Holga camera as a young teenager and spent hours photographing murals and graffiti adorned walls all over the country and in metropolitan D.C. and suburban Maryland. It was an interest my mother and I shared. On family vacations, she and I would visit various corners of a city like Overtown, Miami or outposts of Roxbury and Mattapan in Boston, to capture on film graffiti walls and styles and flavors that were characteristic to specific regions of the country.

Art has always been a part of my life and I enjoy collecting it. It consistently brings me joy and knowledge; a prism that shapes how I see and live in the world.

BEYOND THE STREETS opened its doors on June 21st and runs through August 25, 2019. 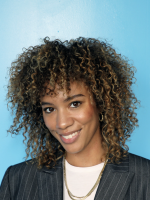 Anaïs Laurent
Anaïs Laurent spearheads publicity for NPR Music, How I Built This, Code Switch and . She's also a contributor to Alt Latino.