High schools seniors across the country are hearing back from colleges they applied to. Commentator Anabelle Gurwitch investigates the annual ritual of college admissions angst.

A week ago, I began receiving emails from my sister Lisa. No note, no explanation, just lists marked yes and no. Her son Max had begun hearing from colleges. Just the site of this list instantly set off my own memories of the sleepless nights, panic and nausea that I had experienced when waiting for those admissions letters.

So I decided to ask my nephew and his friends how they were bearing up under the pressure. Max had gotten into some schools, but from others he had received the proverbial thin envelope.

MAX (Anabelle's Nephew): We're sorry, we are unable to offer you acceptance into our school.

GURWITCH: His friend, Justin Terizzio(ph) had gotten some thin letters too.

Mr. JUSTIN TERIZZIO (Student): I wasn't particularly devastated and I had prepared myself in advance and was completely fine.

GURWITCH: Fine? These students seemed far more mature than I was at their age. Let me make a confession here. I had only applied to three schools. I accidentally missed the obligatory interview for one, tanked the second, and when it came to the third, I begged in my interview; yes, begged. These seniors were so organized and well adjusted. Well, perhaps my sister's suspicions might shed some light on exactly who it is that is in the grip of admissions angst.

Unidentified Woman (Annabelle Gurwitch's Sister): I heard a story about a young man who had climbed Mr. Kilimanjaro and wrote a book about it and got into Harvard.

GURWITCH: Okay. I actually researched this story, and it's true. But to investigate further what was going on out there, I found Barbara Hall, the Director of Admissions at New York University, the college that I begged to attend. To begin with, I asked her if she had witnessed any unusual attention-getting ploys this year.

Ms. BARBARA HALL (Director of Admissions, New York University): We had a young man who showed up for his audition in a penguin suit.

GURWITCH: Is he marching into NYU this coming year?

Ms. HALL: Actually, he was admitted. A young lady was from Texas, and she took a cowboy boot and lacquered pictures of NYU and of New York City all over the boot and said it was her way of getting her foot in the door.

GURWITCH: Did she get in?

GURWITCH: Barbara added that they never accept gifts, even though she is something of a shoe fanatic. However, this doesn't deter people from sending things.

Ms. HALL: I did have a parent last year send a, and this broke my heart to return it, send me a bottle of Dom Perignon.

GURWITCH: Note that the champagne came from, that's right, a parent, confirming what I suspected all along, that parents are the most angst-ridden of all. But what happens once the colleges have spoken? I asked Max if he and his friends were comparing their admissions results.

GURWITCH: Parents, however, sometimes play by their own rules.

Ms. HALL: Parents show up at athletic events wearing new t-shirts with the university logo, or all of the sudden there's a decal on the rear windshield of their car.

GURWITCH: I wonder if Max is planning to wear the sweatshirt of the college he would choose?

MAX: No, I will not wear a sweatshirt with my college on it because college sweatshirts are made in sweatshops.

GURWITCH: Of course one has to wonder, does the drive for acceptance into the best schools really matter? The Wall Street Journal recently published the findings of a study suggesting that there is no real post-college earning benefit from an elite undergraduate degree, and in fact hiring for executive-level positions from graduates of state colleges is on the rise. But as a parent you just want the very best for your child, and even against your best judgment, well, you just can't stop yourself. What size shoe do you wear, Barbara?

GURWITCH: Great. Well, I'm writing that down because my son's eight, and it's never too early to send Barbara Hall a pair of shoes.

Wishing all of you thick envelopes, especially you parents.

BRAND: Annabelle Gurwitch is the author of the new book, Fired: Tales of the Canned, Canceled, Downsized and Dismissed. Transcript provided by NPR, Copyright NPR. 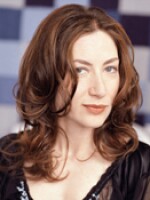 Annabelle Gurwitch
Actress Annabelle Gurwitch is best known to television audiences from her years hosting the cult favorite Dinner and a Movie on TBS. She has appeared in numerous TV series and films, including Life With Mikey, Daddy Day Care, Seinfeld, Suddenly Susan, Charmed, and the remake of the Disney film The Shaggy Dog. Her film Melvin Goes to Dinner, directed by Bob Odenkirk, played on The Sundance Channel and was recently released on DVD.